Ministries Nissi welcomes you to the precious name of our Lord Jesus Christ.

every day, we help to nourish your soul with messages, Bible studies, music, prayers etc.

Our goal is to evangelize the world, because it was one of the Orders of the Lord Jesus in Mat 28: 19-20. We have today with their presence in this beautiful journey. You can follow us at www.ministriesnissi.com and www.radiotvlael.com.

On your phone (Android and Apple ios)

May God shower all kinds of blessings in your life!

The blessing of obedience

To love the ETERNAL, Your GOD, to obey His Voice, and to become attached to HIM: for on that depend on your life, and the prolongation of your days, and this is how you will be able to remain in the country that the LORD has sworn to give to your fathers, Abraham, Isaac, and Jacob, Deuteronomy 30:20. THE WORD OF GOD is A Blessing for those who obey the ETERNAL LORD. At the same time A two-edged sword to separate or strike, according to Hebrews 4:12 or Revelation 19:15. Obedience to the Divine Precepts is not an unimportant thing for us, it is our life, and it is by this that we extend the days in this country that the LORD has given us, declares Deuteronomy 32 47.

Attaching yourself to Your HEAVENLY FATHER is the guarantee of success in your businesses and well-being in your daily life. Contrary to the infidels who lack protection, and who are destroyed, according to Psalm 73: 19. . Because the Love of GOD is to keep His Commandments, says 1 John 5: 3. A Christian who knows His FAITHFUL GOD will spontaneously obey His Precepts which bring blessing for eternal life.

Every Christian should know this principle:

"When I obey the LIVING GOD, I am blessed!"

Billy Graham was born on November 7, 1918. At the age of 16 he made a personal encounter with the Lord Jesus during a revival campaign led by Mordecai Ham in his city, Charlotte.
After taking what the Bible says in Mark 16:15: "Go and preach the Word to All Creation," Billy Graham preached around the world, in the most remote villages in Africa, but also In the Heart of New York, passing through the Soviet bloc.

It is estimated that Billy Graham preached the gospel to more than 210 million people in More than 185 countries and territories. And hundreds of millions of people have also been Touched across TV, movies, radio, etc.

Today, at over 85 years, his ministry is recognized throughout the world.
He is the head of the Billy Graham Evangelistic Association (BGEA) founded in 1950, Including a weekly radio program, prime time TV shows (about 6 times a year), an insert in National and international newspapers, A magazine, and films ...

Billy Graham and his wife Ruth had three daughters and two sons, 19 grandchildren and lots Of great grandchildren. The Graham family has elected a residence in North Carolina.

The Reverend Billy Graham, who transformed American religious life with his preaching and activism, was presidential adviser and the most widely read evangelist in history, he died on Wednesday, February 21, 2018. He was 99 years old. 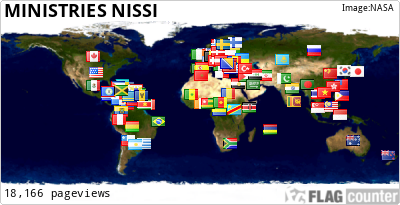